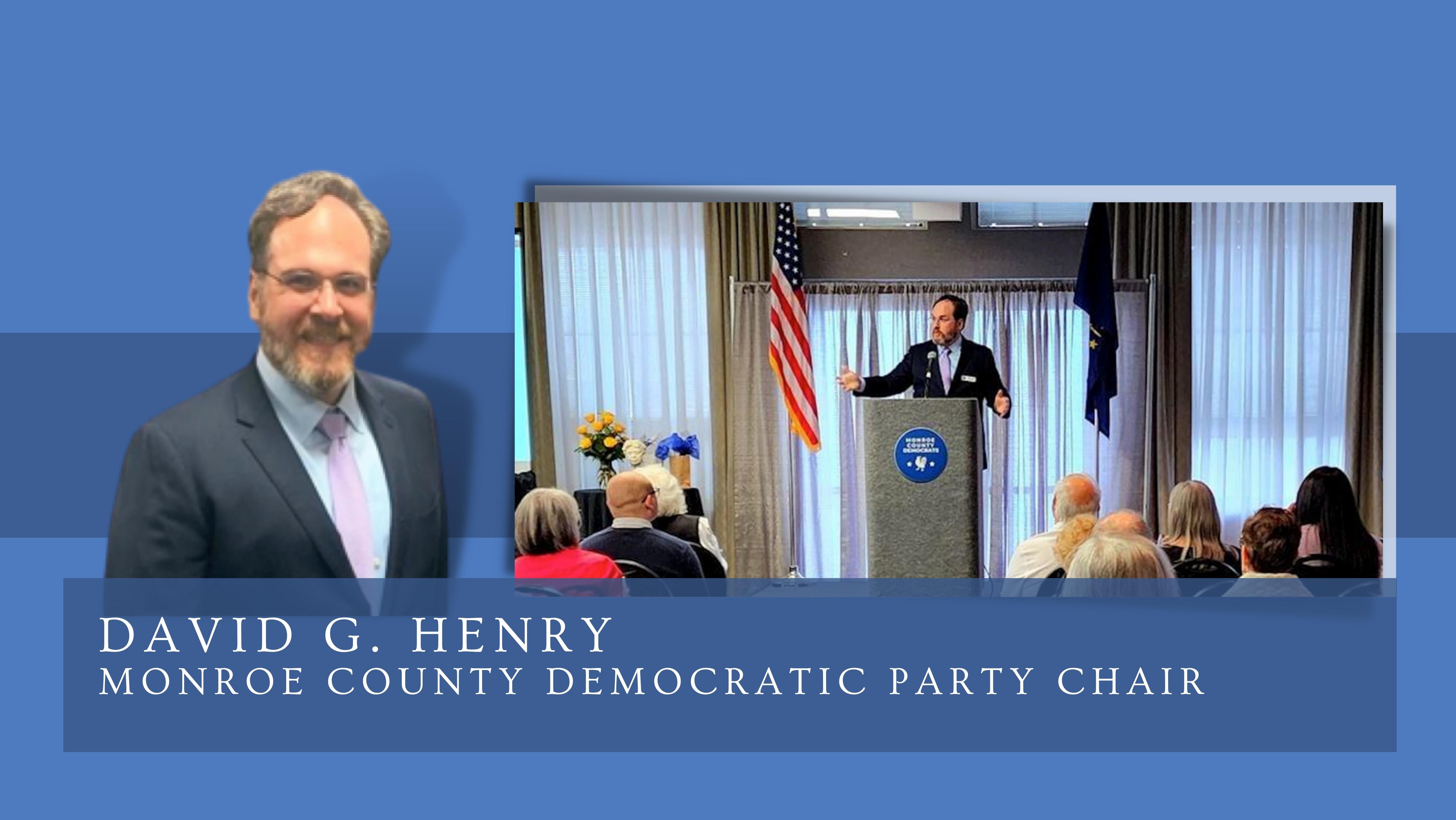 David was elected Chair of the MCDP in January, 2022 having served as acting Chair over periods of 2021, and fully since December, 2021. A past MCDP Vice Chair, David was a delegate to the state democratic party convention in 2020 and 2022. He was active in the Indivisible movement from 2016, serving on the leadership for Indivisible Bloomington/9th District, and was on the endorsement committee for Democracy for Monroe County in 2018 and 2019.

As chair, David has committed to professionalizing party operations to grow from an ad-hoc and word-of-mouth organization to a transparent, reform-focused party that is centered on solidarity, diversity, equity, and inclusion for the whole community.

In his first 100 days, David reorganized the party structure to center the county committee as the deliberative body for policy and resolution making. Leading a party rebrand, he launched new icons and websites to modernize the over 12 year old digital media and marketing of the party.

David worked with caucuses to develop a new county committee that was more representative of the whole community. This effort re-centered the whole county party as the deliberative voice on policy and current events in the community, and restoring a quarterly business meeting for the first time in a generation. Standing committees formed to do the business of the party, drawing people back to party service and to bring more voices into party oversight and decision making.

Committed to paying any staff a living wage of at least $15 an hour, he hired the first paid position in over two years for the party in a communications director to oversee digital and traditional media outreach. This included social media campaigns during Black History Month, Asian and Pacific Islander Heritage Month, LGBTQ Pride Month and Womens' History Month, and the redesign of the weekly newsletter into the "Blue Revue."

He re-created the annual FDR Gala into the "Roosevelt Reception" to honor the contributions of Eleanor Roosevelt as a voice for a citizen's role in global affairs. In honor of her 1950 visit to Bloomington, David initiated the "Eleanor Roosevelt Keynote" address for this annual spring event.

David emphasized fundraising and reduction of costs to assure the party was on stable financial footing with diversified funding. His concentrated effort to bring professional political talent led to strong partnerships and disciplined campaign fundraising approaches that have already doubled contributions to the party for the year. His transparency and reform efforts led to the development of candidate resource guides beginning in the 2022 election cycle, and the decommissioning of the MCDP Headquarters at 116 S. Madison for a post-COVID workspace for the party.

David oversaw a rare event in political life, a tie in a primary ballot. In 2022, he resolved a tie in the Bloomington 23rd precinct with a public coin toss in a rare moment of fun in our local political history.

David worked to assure that there are no second-class Democrats in the party. This included a focus on assuring students - as taxpaying residents of the community - had a voice in their precincts. As a result of those efforts, the 2022-2026 Precinct Committee elected in May, 2022 has membership from ages 18-86, with one in four representatives a college student or young Democrat and 89% of all seats elected on the primary ballot.

David got to work to reconnect Labor to the party, focusing on joint activities with Southern Indiana Area Labor Federation in sponsoring a candidate Labor forum in 2022, followed by calling for the first resolution vote of the County Committee in a generation to support the efforts of the Indiana Graduate Workers Coalition - United Electric Workers in 2022.

MCDP posted its first year in the fiscal black in several years, increasing fundraising by 30% over the past election cycles. With a focus on campaigns and canvassing, the MCDP returned to campaign mailers that targeted 7000 voters in 2022, and paid canvassers hitting 3200 doors in the last 4 days of the campaign. This resulted in the highest voter turnout in a Democratic-majority Midterm since the 1990s.

MCDP's slate included the first Black and Latino Sheriff, Ruben Marte', for the county. MCDP's slate of countywide office seekers saw nearly every office of county leadership held by women with Lee Jones returning to the only all-woman commission in the state and Amy Swain elected Recorder. In the county council, Peter Iversen and Jennifer Crossley affirmed their caucus appointments with terms in their own right, joining Councilperson Kate Wiltz in the 6-1 majority. Crossley is the first elected Black woman to the Council. Emily Salzmann was elected circuit court judge, with a majority of the bench presided over by women in Monroe County. While 2022 saw a statewide defeat for Democrats, under Chair Henry's leadership, Monroe County remains along with Lake and Marion, true blue in 2022.

David moved to Bloomington in 2002 to earn his MPA from the IU O'Neill School of Public and Environmental Affairs in local government administration. In 2007, David moved to Washington, DC, where he was a senior management fellow with the Government of the District of Columbia under then-mayor Adrian Fenty. A policy wonk and government project management consultant, David then worked in public safety and security policy at the National Governors Association in Washington, DC before "Bloomeranging" back to Bloomington in 2013. He is also a graduate of Baldwin Wallace College in Berea, Ohio, where he studied political science and international studies.

David is also on the teaching faculty of the O'Neill School, where he developed the flagship's homeland security studies minor. He has also consulted on projects at the Hamilton-Lugar School of International Studies and the Luddy School of Informatics, Computers and Engineering on projects as varied as human trafficking prevention, cyber security information sharing, and environmental resilience. Professionally, David has served on advisory boards and forums with FEMA and the National Academies of Science among others.

David is a member of Bloomington Sunrise Rotary where he is service chair, and has served on the Monroe County Affordable Housing Advisory Commission, and briefly on the state Executive Board of Sierra Club Hoosier Chapter.

Born in Appalachia outside of Pittsburgh, and raised in the Cleveland Rust Belt with stints in Washington, DC, David lives in Van Buren Township with his wife and three kids. Ask David about his years singing in choruses at the Kennedy Center in Washington, preferably in the Key of D.