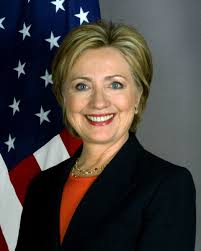 She believes in equal pay for equal work, to address current shortfalls in how much women are paid to do the same jobs men do. Clinton has explicitly focused on family issues and supports universal pre-K.
On LGBT rights, she wants to see the right to same-sex marriage enshrined in the constitution.
Clinton holds that allowing undocumented immigrants to have a path to citizenship " is at its heart a family issue."

Clinton has expressed support for Common Core. She says, "The really unfortunate argument that's been going on around Common Core, it’s very painful because the Common Core started off as a bipartisan effort. It was actually nonpartisan. It wasn’t politicized....Iowa has had a testing system based on a core curriculum for a really long time. And [speaking to Iowans] you see the value of it, you understand why

that helps you organize your whole education system. And a lot of states unfortunately haven’t had that, and so don’t understand the value of a core, in this sense a Common Core."

Clinton is in favor of maintaining American influence in the Middle East. She opposes and criticized Trump's call to ban Muslims from the United States. She told the American Israel Public Affairs Committee, "America can’t ever be neutral when it comes to Israel’s security and survival."